This post starts like you might imagine: I woke up. It was around 8AM and I checked the satellite pictures on the internet as well as simply looking out the window. I figured, if all went well today there’s a real chance of making my first jump. The weather looked okay, a few scattered clouds. Possibly too windy. I got some breakfast and headed out to the DZ. Once again I witnessed planes being pushed out of hangars and everything, still a nice sight.

When the course resumed around nine, it was clear we were now going to be permanently separated from the Danish static-line group. We were introduced to our AFF-instructor Tjalle. He was a familiar face, I made my tandem jump with him last year. So that’s nice! We were now getting AFF-specific instructions. We went with our faces the rolling boards. It was now time to practice the actual free-fall routine. It was divided into blocks, first you breathe.. then check your heading, altitude and shout the altitude to your instructor (Circle of awareness). He won’t actually be able to hear you while you’re falling but at least he can see that you checked your altitude and possibly read your lips a bit. Next up were the practice touches. We would practice pulling the parachute handle in the air to get a feel of where it is. After this another circle of awareness. And after this we would have.. “free – free-fall” time. Until it would be time to pull the parachute.

In the mean time my buddy Ralph arrived to join me on the vacation. He made some pictures.
Next up was the plane exit procedure. We practiced this a couple of times out of a simple plane model.
Now it was time to put on a real parachute and do all the things we practiced again. We simulated the free-fall part and actually pulled our pilot chute to get a feel for it. Now again the plane exit. Ralph later made a picture of me practicing it by myself. 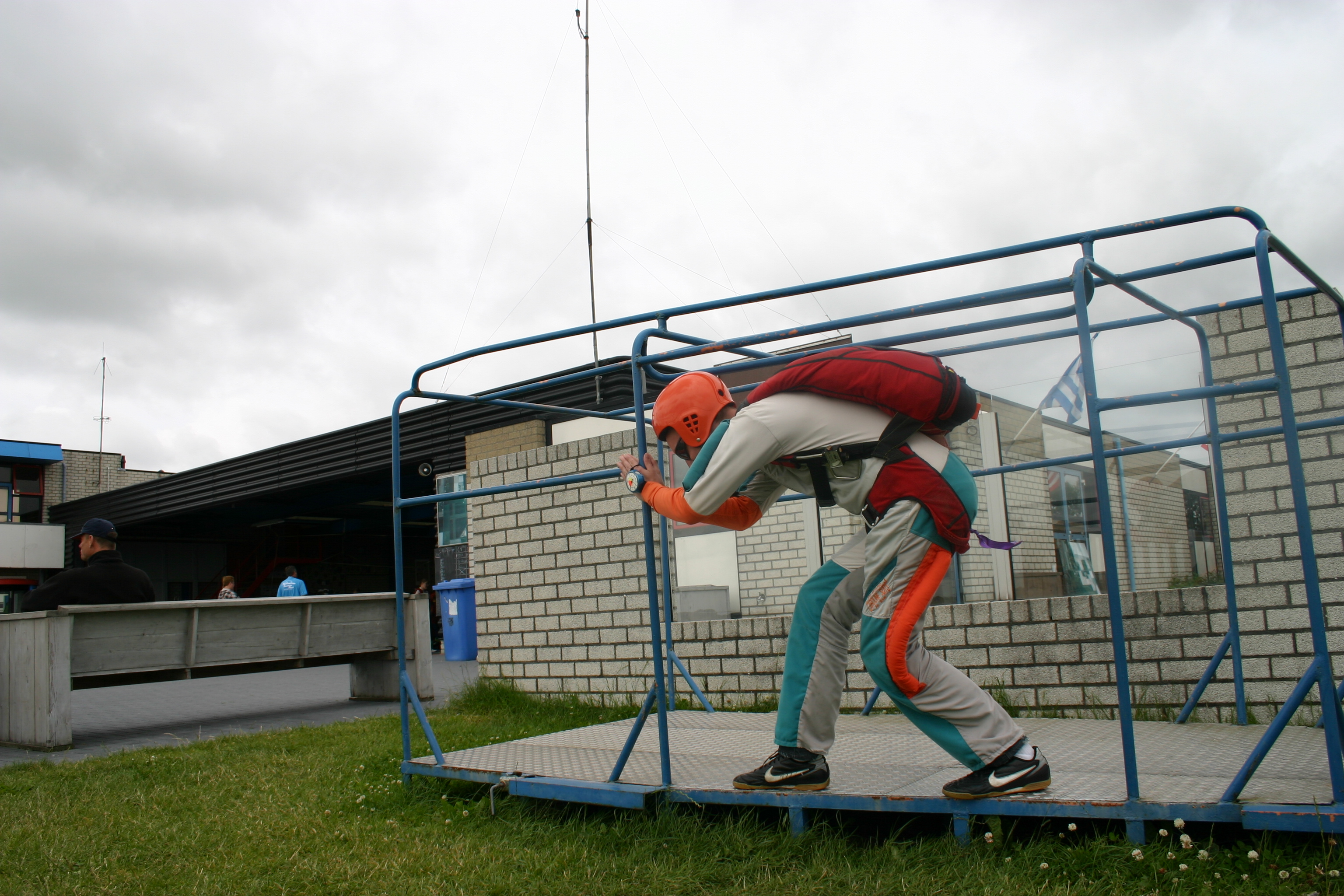 Then we were hooked up to a rack, hanging on our parachute rig and harness. This was the harness test and we would have to make the right decisions and follow the right procedures. I luckily didn’t hesitate too much or made any mistakes so I was passed to jump. Now we just had to wait, and wait. The winds had really picked up so we weren’t allowed to go up just yet. It wasn’t going to improve, so I left my number if the winds would magically drop again. So we went back to the hotel and played some soccer that evening.

I am 22 years old. I'm studying computer engineering in Groningen, the Netherlands. I like music, movies, skydiving, the weather, piano, computers and snowboarding!
View all posts by Adriaan →
This entry was posted in AFF. Bookmark the permalink.